“Locker Room Talk” may be Trademarkable after Matal v. Tam

“Locker Room Talk” may be Trademarkable after Matal v. Tam

While you may have been surprised, shocked, or even outraged by some of the comments President Trump made during his race to the White House, you probably didn’t think that they were trademark-worthy. At least some Americans would disagree, however. Four applications have been filed at the United States Patent and Trademark Office in an attempt to register trademarks in connection with variations of the term “grab ‘em by the pussy.” For instance, a trademark application was filed for the mark GRAB HER BY THE PUSSY in connection with bumper stickers, hats, t-shirts, and advertising services. Perhaps not surprisingly, the Trademark Office has refused registration of this mark on several grounds.

The first reason registration was refused is because there are three other applications pending for similar marks. These marks are “GRAB THEM BY THE PUSSY,” GRAB LIFE BY THE PUSSY, and the more understated logo shown below. Capitalism at its finest.

The second, and perhaps more understandable, reason that registration was refused is because the mark GRAB HER BY THE PUSSY includes matter that “may” be considered scandalous or immoral. For a mark to be “scandalous,” the evidence must show that the mark would be considered shocking to a person’s sense of decency or propriety, would offend a person’s conscience or moral feelings, or would cause people to call out in condemnation.[1]

A mark is scandalous when the evidence demonstrates that a substantial portion of the public would consider the mark to be scandalous in the context of current attitudes and the relevant marketplace.[2] The Trademark Office cited to ample evidence establishing that the term “pussy” is vulgar, and would especially be viewed as such in the context of the well-publicized quote by President Trump. It is worth noting that in a very recent Supreme Court decision, the Court held that the disparagement clause of the Trademark Act violates the Free Speech Clause of the First Amendment, and is therefore unconstitutional.[3]

The disparagement clause prohibits the registration of a trademark “which may disparage . . . persons, living or dead, institutions, beliefs, or national symbols, or bring them into contempt, or disrepute.”[4] In one of the very first paragraphs of the opinion, the Court explained that speech “may not be banned on the ground that it expresses ideas that offend.”[5] Later, the Court went on to state that  speech “that demeans on the basis of race, ethnicity, gender, religion, age, disability, or any other similar ground is hateful; but the proudest boast of our free speech jurisprudence is that we protect the freedom to express ‘the thought that we hate.’”[6] Following the Supreme Court’s logic in Matal v. Tam, it seems likely that the scandalous clause of the Trademark Act, which prevents marks from being registered if they would “offend” a person’s conscience, would be found to violate the First Amendment for the same reasons as the disparagement clause.

The third reason registration was refused was because the mark GRAB HER BY THE PUSSY merely conveys an informational social, political, religious, or similar kind of message and as such, does not function as a trademark.

The Purpose of Trademark Law

The purpose of trademark law is to indicate the source of a product so that by looking at a brand name, consumers will immediately have some information about the product. For instance, APPLE is a very well-regarded brand by many, and generally, has a good reputation in the field of electronics. As such, when purchasing products from Apple, whether it is a well-established product like a laptop or a new product like a watch, consumers have faith in the brand because it is one that they recognize and can trust. 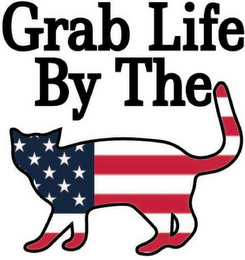 The other pending marks discussed earlier, “GRAB THEM BY THE PUSSY,” GRAB LIFE BY THE PUSSY, and the logo shown here, have all been issued similar refusals by the Trademark Office. Even if the scandalous clause is found to be unconstitutional, there are several other hurdles that the applicants would need to overcome before being granted registrations. For example, it seems unlikely that the applicants will be able to establish that they are using their marks in a trademark sense (i.e., to indicate the source or brand name), particularly in view of how notorious President Trump’s remarks are.