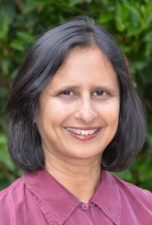 Jayshree has almost twenty-five years of experience counseling clients in the biotechnology, pharmaceutical and medical device areas, assisting with patent drafting and prosecution for US and worldwide patent protection, due diligences and freedom to operate assessments of intellectual property portfolios. Jayshree also is experienced at drafting invalidity and non-infringement opinions.

For almost ten years, Jayshree was an Adjunct Professor of Patent Law at California Western School of Law. She also has been invited as a guest lecturer on intellectual property topics at the Rady School of Management, the Keck Graduate Institute and the University of San Diego School of Law.

Jayshree pursued law as a second career, having previously worked as a research scientist in San Diego’s biotechnology sector. Prior to joining Loza & Loza, Jayshree worked at international law firms with an intellectual property focus. She also has served as a consultant to local and international law firms, as well as an in-house consultant to several biotechnology, pharmaceutical and medical device companies.

Her technical areas of expertise include: