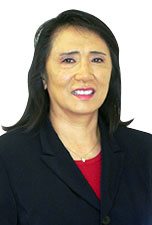 Arlyn Alonzo concentrates her practice on the preparation and prosecution of patent applications as well as technically complex patent infringement litigation cases. Arlyn has worked with clients in a variety of high-tech industries, including wireless communication systems and networks, optoelectronics, digital storage media, medical devices and other electrical and mechanical inventions.

Arlyn has worked as a patent litigator and patent prosecutor at premier law firms including Lyon & Lyon, McDermott Will & Emery, and Connolly Bove Lodge & Hutz. She also has in-house experience, having served as the Chief IP Counsel for a noted biomedical device company.

Arlyn has 22 years of experience in patent law and a decade of professional experience in communication system engineering with a major satellite communications company, including spacecraft with synthetic aperture radar missions.